Boreland Curling Club was founded in 1979.

The original members were all neighbours and friends living in the Boreland Estate in Inverkeithing. To avoid spending every Friday evening in the pub they decided to play some curling. It was mistakenly believed that this would avoid them being involved in taking strong drink! In the beginning they simply took some ice at Kinross and played amongst themselves. After a couple of seasons, they formed Boreland Curling Club and decided to formally apply for membership of the Royal Caledonian Curling Club. They were admitted in 1981, sponsored by Fossoway Curling Club.

The Founder Members were:

Four of the Founder Members at Boreland`s 35th Celebration:

In the early years the club was run on an extremely informal basis and unfortunately the minutes from the early meetings were lost from the boot of a past secretary’s car when his car broke down on the Forth Road Bridge and the wind blew the papers out of the boot!!! This has set a long tradition of members losing trophies etc belonging to the club (at least for a month or two!).

In these early days, Annual General Meetings were held either in a member’s house or in a local pub. These tended to be rather lengthy affairs. For example, one of the first AGM’s held at Bill Rennie’s house was convened at 7pm and closed at 5am! A few years later, an AGM was held in the Bruce Arms in Limekilns. It was convened at 7pm but, by closing time, the members were still on item 2 of the agenda and had to adjourn to Derek Arnott’s house where it is still uncertain if the final items on the agenda were ever discussed!

In 1984 the AGM moved to the Coaledge Tavern, near Crossgates, where the usual debates took place. Unfortunately, on that occasion proceedings were interrupted when a brawl broke out between two of the locals. No members were involved or hurt but it did add a bit of excitement to the evening!

The club was becoming slightly larger with membership increasing from the original 8 to 12 then 16 and by 1988 20 members. In keeping with this new-found status, the AGM that year was held in the Board Room of the City Hotel in Dunfermline. At that meeting two momentous decisions were taken:

Each year discussion took place on opening up the club to women and, each year, it was recorded that by a narrow margin the decision was to remain an all-male club.

Robin Park, as Club President, chaired the first Dinner and Court which was highly successful and saw a record number of ‘young curlers’ join the club. Being a small club, the success of the dinner depended on a significant number of guests from neighbouring clubs coming along and supporting the event. For this reason, it was decided that dinners should be held only every second year so as not to put too big a strain of the support of neighbouring clubs. The club has continued to hold dinners on that basis ever since.

The inaugural dinner in 1989 was held in the King Malcolm Hotel in Dunfermline and at least two further dinners were also held there. Guests in the Hotel apparently expressed some surprise to hear chains rattling and goats being led into the reception area. The club then held a few dinners at the Brucefield Hotel in Dunfermline before it closed down. The club’s most recent dinners since 2015 have been held in the Queen’s Hall in Charlestown. The venue has proved very popular allowing us to serve our famous Clyde Steamers (with a secret recipe introduced by Andy Stevenson and know only to very few members) as guests arrive for the evening. The room`s layout is also ideal for all the other dinner activities!

Members of the Club compete each year in a variety of internal and external competitions, details of which can be seen by clicking on the "Competitions" link at the top of this screen.

Boreland runs a variety of internal competitions every season. These are highly competitive, but always played in the best spirit of sportsmanship. They cover leagues, knock-outs, pairs and individual competitions.

Since the early days of simply playing amongst ourselves, Boreland has actively participated in all the main competitions within the West of Fife Province. During that time, we have won a number of the Competitions including the Province League, Province Knock out and Province Pairs. Details of our successes are to be found by clicking on the "Competitions" link at the top of this screen.

Our playing success has been mixed in competitive matches but there have been frequent highlights, including recording an 8-ender in a Province League match against Dalgety Bay in season 1997/1998.

Over the years we have enjoyed regular challenge matches against neighbouring clubs. Our games against Aberdour, Broomhall, Dalgety Bay, Dunfermline, Fossoway, Inverkeithing, Royal Bank of Scotland (Edinburgh) and the Sweepers (originally National Coal Board) (see the the table below) have a common thread in that they are all keenly contested, they are invariably played in excellent spirit and they have fostered many friendships.

Our annual entry for the Grand Match has always been submitted to the RCCC more in hope than in expectation.

Two of our members have curled with RCCC tours in Canada:

Since 2000, the Club has held an "Away Weekend" for members every other year in the spring (alternating with the Club Dinners). At these events, held over two days at various curling locations around Scotland, a Bonspiel Competition is held, together with a Dinner and other activities, large amounts of camaraderie and liquor, not necessarily in that order!

Mother nature intervened in 2018, sending Scotland "the beast from the east", blocking roads out of Fife and forcing the postponement of our trip to Stranraer until November that year. 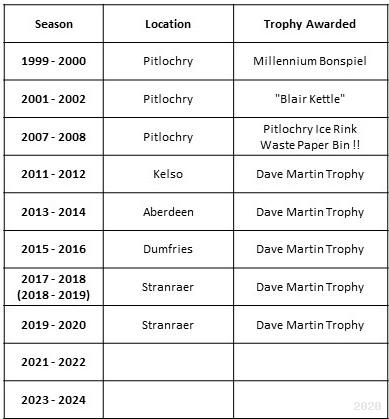 The following Members have sadly passed away whilst actively involved in the Club:

Members in Curling, Outside of Boreland:

Several of Boreland’s Members have also held office within the curling world, as below.

Many of our Members are also Founder Members of Kinross Curling Trust, a charitable trust set up in 2009 to oversee the development of a new Curling Rink, National Curling Academy and Curling Museum in Kinross. Due to unsurmountable hurdles, the Trust was forced to modify its approach to the curling facilities in Kinross and decided to upgrade the existing facility, leasing it from the Green Hotel. On 01/09/2013, the Trust took over the operation of the Curling Rink at Kinross and started trading as an independent company.

The following Boreland Members have taken an active role in the operation of Kinross Curling Trust (as at June 2020):

See below the members who have held office within the Club from its inception to 2001: 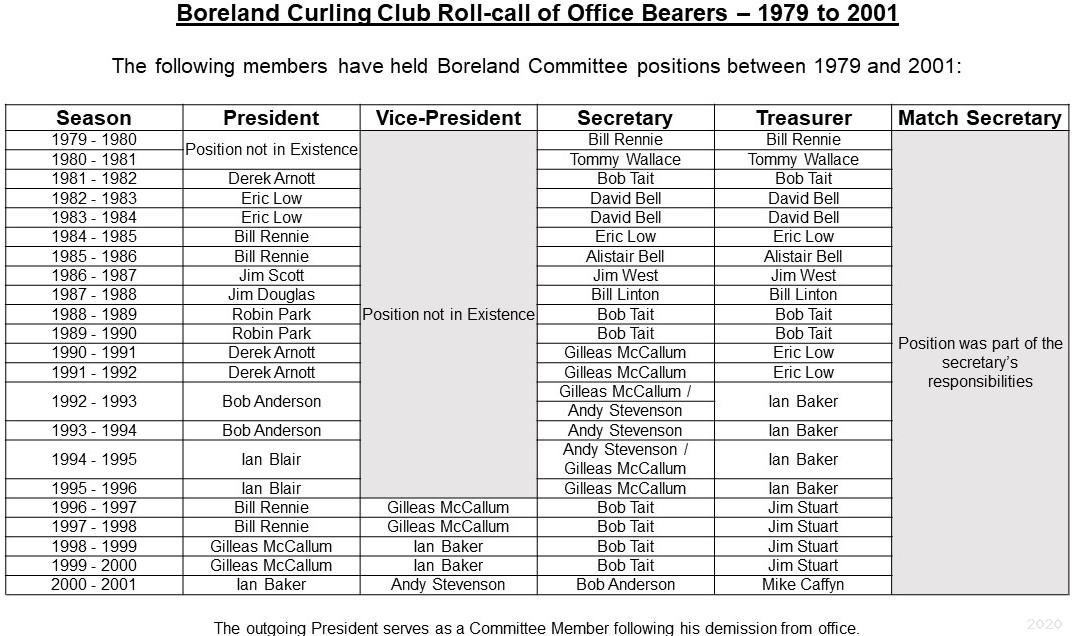 See below the members who have held office within the Club since 2001: 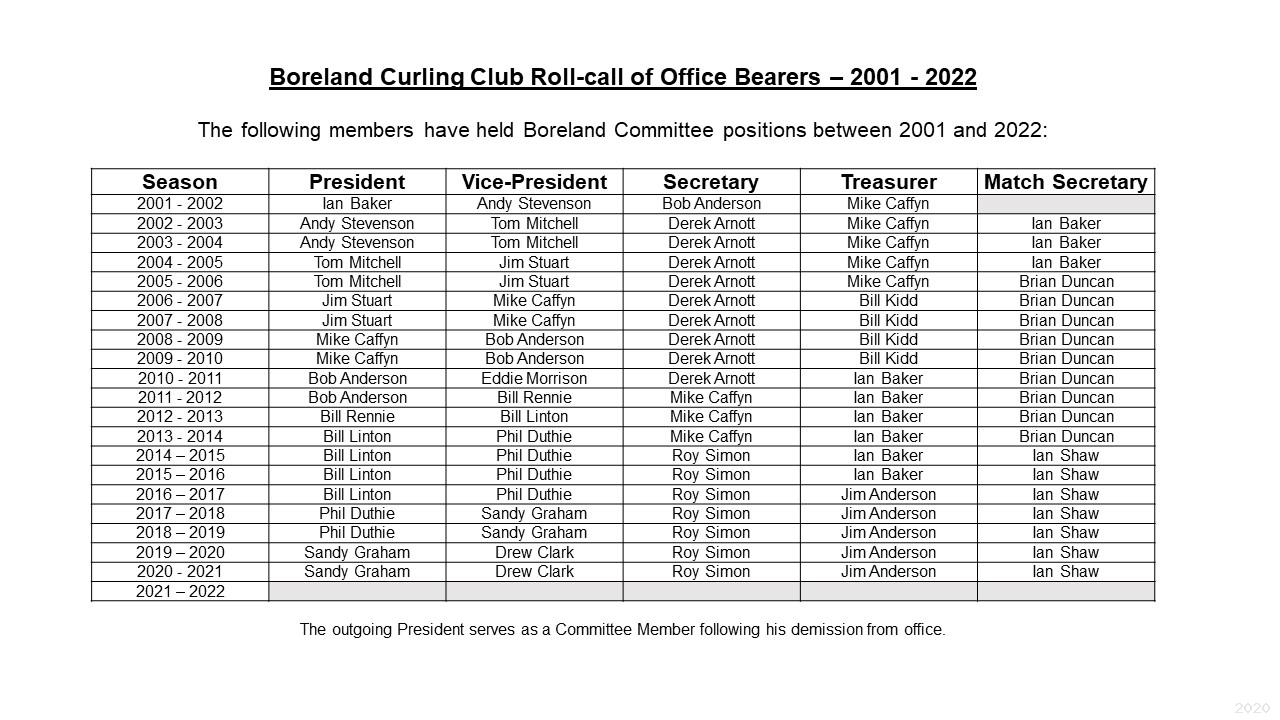